Artistically, Bali is a mixture of cultures and traditions. The Balinese people have a natural capacity for absorbing different cultural elements and blending them with their own. For centuries, artists and craftsmen in Bali worked under the benefaction of priests and ruling classes, decorating palaces and temples. The artists never signed their work and usually lived closely together in special villages. As their designs followed strict aesthetic and religious guidelines, the artists generally didn’t have much room for personal expression. With the arrival of European artists in the beginning of the 20th century, this soon began to change. Local artists started to develop their own individual styles.

Until the start of the 20th century, the dominant form of painting was the portrayal of Hindu epics by painters and illustrators called ‘Sangging’. Aside from making large representational paintings, the ‘Sangging’ were expected to decorate everything from gourds, wooden altars, bamboo vessels, headboards for princely bed chambers and, in particular, they were expected to illustrate astrological wall hangings on bark paper or cloth. It wasn’t until the early 1900s that western influences reached Bali. The use of Asian symbols in the works of, among others, Paul Gauguin, Toulouse Lautrec and Camille Pissaro, created a new trend for Asian-influenced art and for European painters to move to Bali. Ubud’s fame regarding art can be traced to the arrival of the German painter Walter Spies and the Dutch Rudolf Bonnet. There is a much wider range of artistic styles today.

Influenced by the western use of perspective and everyday-life subject matter, the Ubud style is one of the most ‘expressionistic’ of all Bali’s schools. Despite this, Ubud’s art still retains many traditional features, including attention to detail and stylized characters.

Strongly wayang based (puppet). This style involves hundreds of intricately painted representations of Balinese life, filling every available nook and cranny of the canvas.

Keliki paintings measure 20cm by 15cm. They contain scenes of mythical and Ramayanic characters engaged in battle, good versus evil, on sinister backgrounds.

From this village, on the outskirts of Ubud, a new style sprang up during the 1960s. It concentrated on just a few natural components, such as birds, insects, butterflies and plants.

Stone carvings were mainly used to decorate temples and palaces. There is little difference between the iconography decorating temples and that of private buildings. Gateways represent the dividing line between the inner and outer worlds and as such are the recipients of some of the most fantastic carvings. Bali’s modern-day centre of stone carving is the village of Batubulan, situated halfway between the towns of Denpasar and Ubud. One of the most striking things about Bali is the rich variety of cloths and materials that are to be seen in thousands of shops throughout the island. However, only a small proportion of these are indigenous to Bali. The myriad of batik clothes and sarongs available everywhere, are mainly imported from Java. Bali does have a very rich textile industry of its own. The beautiful Songket fabrics, worn by performers of traditional dances, are a good example. In Songket gold and silver threads are woven into the cloth to create complex motifs of birds, butterflies and flowers.

Endek, or weft ikat, is another common method used in Bali. In weft ikat weaving, the weft threads are dyed to create the design and are then woven with plain warp threads.

The least common form of weaving to be seen in Bali is the Geringsing, or double-ikat, and it is perhaps the most sought after. In Geringsing both the warp and weft threads are dyed to their final designs before being woven together. With the exception of certain areas in India and Japan, this weaving technique can only be found in the small Bali Aga village of Tenganan, East Bali. 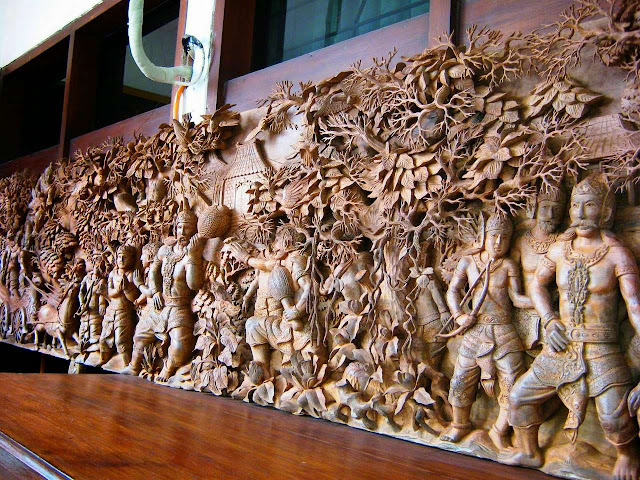 Wood and stone carving have traditionally been featured largely in temple and palace architecture. Immaculately carved demons and mythical beings decorate pillars, door panels, lintels and window shutters with the object of protecting the buildings from evil intruders. Scenes of legendary figures placed within a floral décor, set a more pleasant and educational tone. With the arrival of European influences, wood carving started to develop along more innovative and commercial lines. Today, whole villages specialise in producing certain styles of work. The village of Mas, near Ubud, is the best known for its carvings of female figures, Buddhas, characters from Hindu epics and the traditional topeng (mask) and Wayang Wong masks. 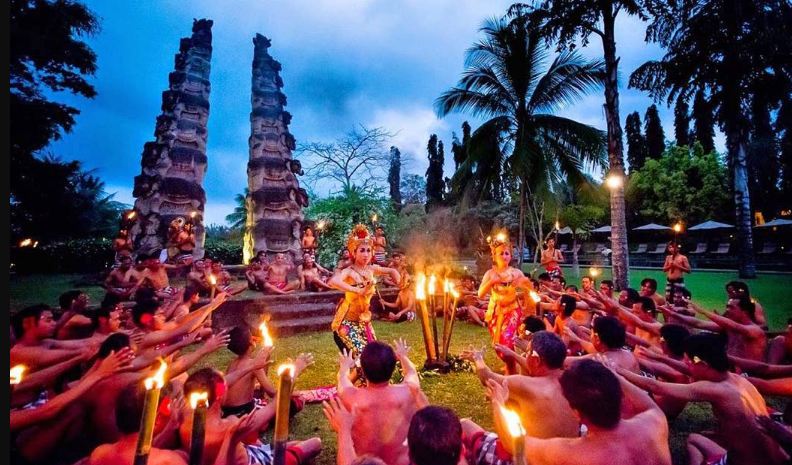 Dance and drama have played a historically important role in Balinese society. Through this medium, people learned about the tales of the Ramayana, Mahabarata and of other epic stories from Balinese history. The following are brief descriptions of some of the more well-known dance-dramas that can be seen at regular performances throughout Bali.

This is a warrior’s dance. It is usually performed by men, either solo or in a group of five or more.

This is a story about the struggle between good and evil. Good is personified by the Barong Keket, a strange but fun-loving creature in the shape of a shaggy semi-lion. Evil is represented by Rangda, a witch.

The most famous of the Balinese dances, originated from the Sanghyang dance choirs, holds its uniqueness in the entrancing ‘Kecak, kecak’ chant. The Kecak as a dance developed in the 1930s, in the village of Bona, where it is still performed regularly.

This dance tells a story of princess Rangkesari being held captive by King Lakesmi. Rangkesari’s brother, prince Daha, gathers an army to rescue his sister. The Legong is a very classical and graceful dance, always performed by prepubescent girls, who can be as young as eight or nine years old.

Wayang Kulit is one of the great story-telling traditions of the Javanese and Balinese people. The wayang show usually consists of a small four-piece orchestra, which provides the musical accompaniment, around sixty ‘puppets’, carved out of flat pieces of water buffalo hide, and the dalang or puppet-master. The good characters speak in ancient ‘Kawi’, whereas the evil or coarse ones speak Balinese.